Home
Spin Bikes
What is the Difference Between an Exercise Bike and a Spin Bike?

If you’re looking to pick up a bike for your apartment or home gym, you might be struggling with the sheer variety of bikes that are up for sale in 2022. You can make life easier by deciding between the two most popular ones.

In this post, we’re going over the main differences between an exercise bike and a spin bike to help you decide which one you should go for. There’s no better or worst, it’s more a case of picking the right exercise gear for the right job.

Grab a fresh bottle of water and let’s get biking.

You want to start your workout with some pedalling, but what is the difference between an exercise bike and a spin bike?

There are six major differences between an exercise bike and a spin bike. Uses, design, riding position, muscles worked, flywheel weight, and calories burned are what we will be discussing. 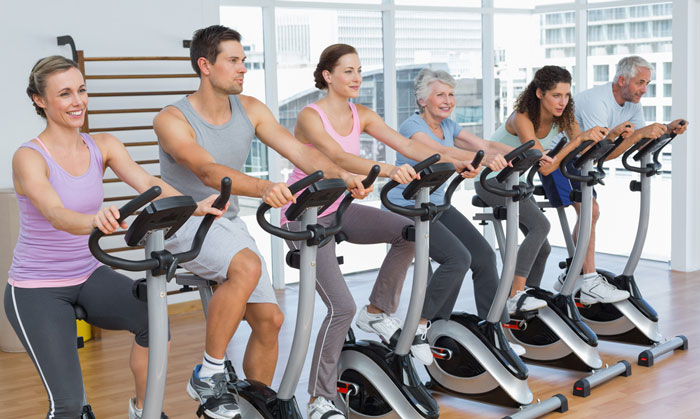 You may have heard the term spin class bandied about the gym, but what exactly is a spin class? A spin class is a high-intensity workout class that uses a spin bike, usually with an instructor and any number of participants.

The reason these classes use spin bikes as opposed to exercise bikes is that the class is supposed to mimic actual outdoor bicycling, and a spin bike is made to be as close to a regular bicycle as possible.

An exercise bike is a lot less similar to an actual bicycle, and therefore it wouldn’t be appropriate for use in a spin class.

Both a spin bike and an exercise bike will consist of one wheel and pedals. They are similar in construction but do vary slightly.

A spin bike more closely resembles an outdoor bike, in that it is longer and allows the user to be more parallel to the ground while using. The handlebars are usually immobile.

An exercise bike is taller with a higher seat and has the rider in an upright position when using. An exercise bike is also more likely to have a digital screen with readouts, so if keeping track of distance or calories is important to you, an exercise bike is probably the way to go. On some models, the handlebars will move as well.

3 – How do the riding positions vary?

On a spin bike, the rider will be leaned over the bike, just like they would on an outdoor bicycle. This allows the option for standing while riding, which changes the muscles activated by the workout. This standing position isn’t possible on an exercise bike.

Spin bikes generally have handlebars you can grip in a variety of positions, and cater for riding standing up.

If you want a good spin bike for doing classes at home, see our JTX Cyclo 6 Review.

With an exercise bike, the ride will be sitting upright, like on a stool. For riders with back or neck problems, this may be preferable.

Not everyone will find spin bikes comfortable. Depending on your age and the kind of exercise you’re going for, you may prefer the more comfortable ride from a regular exercise bike.

4 – Different muscles worked by each cycle

In a sitting position, the muscles worked on both a spin bike and an exercise bike will be similar. When riding, the glutes, calves, quads, and hamstrings will be activated.

Since a spin bike allows a rider to stand, this opens up the potential to work other muscles as well. When standing on a spin bike, the core, shoulders, and arms will get a nice workout along with the lower body.

Spin bikes have a large, tough frame and strong pedals and cranks that are designed for riders to stand in the saddle and you’ll likely have seen them doing this if you’ve been to a gym when there was a spin class on.

5 – How does the flywheel weight differ? 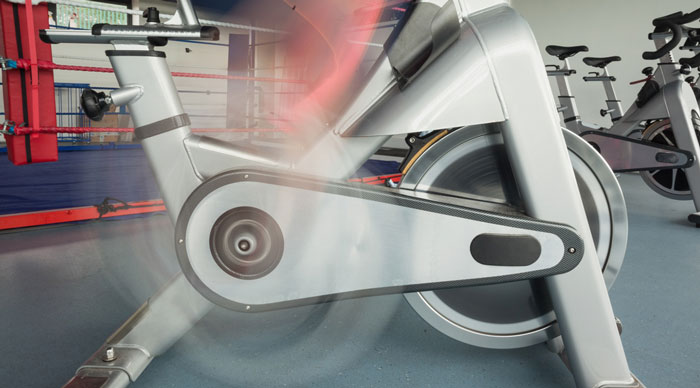 A flywheel is the big wheel present on both an exercise bike and a spin bike.

The flywheel on an exercise bike will be lighter than that of a spin bike. This means when the rider stops pedalling, everything will slowly come to a stop since the rider was providing all the energy to keep the flywheel moving.

With the heavier flywheel in the spin bike, the pedals and wheel will continue to spin even if you stop pedalling.

7 – Is there any difference in terms of calories you’ll burn?

When you see someone in a spin class, pedalling like there’s no tomorrow, it would be easy to assume that spin bikes burn more calories. However, if you plan on remaining seated, then the number of calories burned will be similar on either bike.

The amount of calories you burn depends on the intensity and duration of your workout. That being said, spin classes are an ideal and reliable way to burn calories in a set amount of time.

It’s the ability to stand, therefore activating more muscles, that can make the workout on a spin bike more intense and help the rider burn calories quicker.

If you plan on combining both standing and sitting positions during your workout, the spin bike is the best choice.

Should you buy a spin bike or an upright bike?

So we’ve covered what the differences between these two popular bits of gym gear are, but that doesn’t help you decide which one is right for you. It’s clear that these two bikes to a different job – so which one should you get?

You should buy a spin bike if…

Go for an upright bike if…

What’s the difference as far as storage goes?

If you’re looking for a super-space saving bike, it’s unlikely you’ll find a spin bike that fits this need. I don’t recall seeing a collapsible spin bike in the years I’ve been reviewing gym gear.

The same is not true for upright bikes. There are some pretty decent folding bikes that normally have an X shape and fold away just like an ironing board. If you’re absolutely strapped for space, picking one of these up is a great way to get your biking done and then stash in a cupboard.

For older gym-goers or ones with injuries, a traditional exercise bike is a great, comfortable choice for a workout.

For cyclers looking to get the closest workout to a regular bike, or for someone planning on attending a spin class, the spin bike will provide everything they need.