If you’ve never heard of an Airbike before, you’d better sit down and prepare to learn about the kingpin of cardio machines as we delve into some fan bike benefits that make this fitness gear a must.

The Airbike combines the best of spinning and of Crossfit to create an extreme full body workout that will have you dripping with sweat in minutes. It’s not for the faint hearted, so we’ll understand if not everyone reads this post to the end. For those of you who are looking to take your workout to the next level and really challenge yourself, keep reading.

What exactly is an air bike?

The Air bike is a stationary bike with an inbuilt wind resistant fan.

You’ll normally take a seated position and, through a combination of pedalling action and pulling and pushing two vertical arms, move a large fan fly wheel. Rather than a weighted flywheel, air bikes use a large fan at the front of the bike. This has the benefit of providing as much (or as little) resistance as you want. 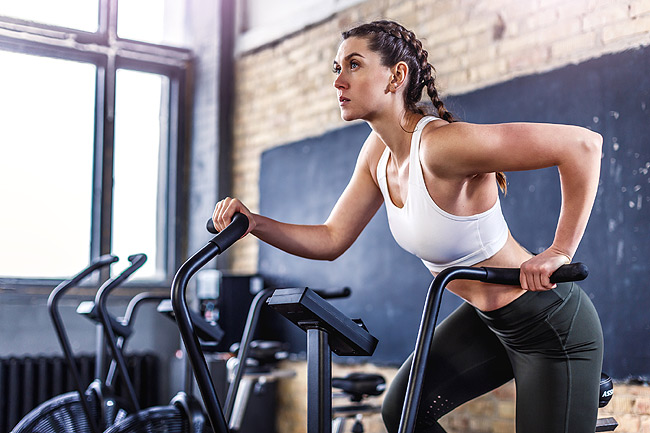 Using the bike is simple: in addition to peddling with your lower body, you push and pull levers with your upper body. The fan picks up speed from these movements and this creates resistance that you have to use your entire body to fight through.

Top 10 benefits you’ll get from using an air bike

If you’re still unsure if an air bike is for you, take a look at our guide on Assault Bike Benefits or our Air Bikes for Beginners section.

What muscles do air bikes work?

Unlike other forms of cardio, such as jogging or cycling, the Airbike can be easily integrated into a circuit training programme because it facilitates an intense anaerobic burst. Essentially, this is when your body converts sugar into energy without high levels of oxygen.

This occurs when you do high intensity bursts of exercise that require a fast delivery of energy. Powerlifting, bodyweight exercises, and other HIIT classics are good examples of anaerobic exercises.

An Airbike interval can add another dimension to your circuit while complementing the timings of the other intervals.

Which is the best air bike to buy?

Unlike upright exercise bikes, and spin bikes, the selection of air bikes is nowhere near as vast and confusing. While more companies are catching up with the demand for these air-based cycles, there’s still a pretty good, if reduced choice in the UK.

If you like the sound of what these intense workout bikes have to offer, don’t miss our guide to the best of the current air bikes.

Also, take a look at our JTX Mission Air Bike review. This bike offers a good balance of price and performance and is a good alternative to the Assault Bike.

Are air bikes good for cardio?

It’s not just a one minute wonder though. The Airbike provides the setting for the most gruelling and intense workout session of your life that’ll leave you buzzing with endorphins afterwards.

The in-built computer gives you access to a range of pre-programmed workouts as well as the option to create your own. The potential combinations of targets and intensity settings are effectively limitless, which helps to shake up routine and add variety to your training. 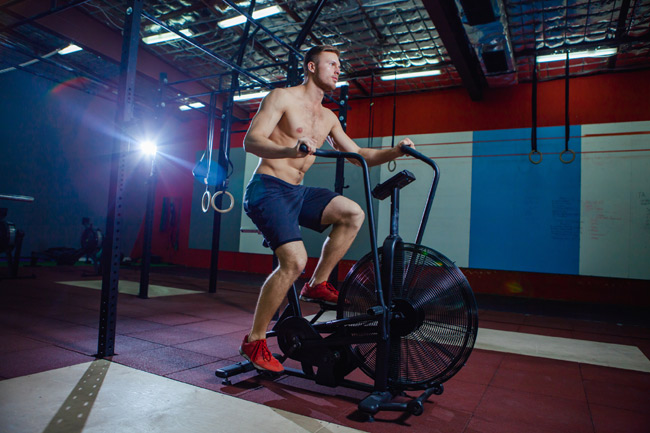 Air bikes are an extremely good form or cardio, and can burn off a crazy amount of calories

You can play with these to create endurance-focused workouts and build stamina, as well as more intense short workouts. It also delivers instant feedback of your performance metrics, including heart rate, calorie count, wattage, speed, and distance. This will motivate you to reach for a new PB every time you sit on the seat.

New to air bikes? The JTX Mission Air Bike is a really good quality bike to get started with.

What are the benefits of a Fan Bike?

The primary benefit of an Airbike workout is its unparalleled calorie burning. If you think about it, you’re effectively doing two intense workouts at once – one upper and one lower – so it should come as no surprise that this is a real calorie drainer.

In fact, the current world record for the highest number of calories burned in a minute was achieved on an Airbike. Rob MacDonald, an American personal trainer, burned an epic 87 calories in one minute!

How many calories does an air bike burn?

While the Airbike can legitimately claim to burn up to 87 calories a minute, it’s more in the region of 30 calories a minute for us regular folk (although who knows, may the next Rob MacDonald is reading this).

An unexpected benefit of the Airbike is how easy it is to use – in a technical sense. On a regular bike, positioning is very important, namely the height of your seat and handlebars relative to one another and your own height.

This can often require a degree of specialised setup to avoid injury and strain to the upper body, especially the core and back. With the Airbike, because the rotational motion engages the whole trunk and upper body, you transmit power vertically down your legs more efficiently while in a position that supports a natural flow and this protects against strain.

A similar effect is seen in boxing. As a boxer punches forward with their arm, they push down with their leg to create power up through the body. Pretty much anyone can get on an Airbike and safely operate it because the machine keeps you in place while you use it.

What are the negatives to air bikes?

Rather than just singing the praises of this unusual kind of exercise bike, here are some of the downsides to this bike: 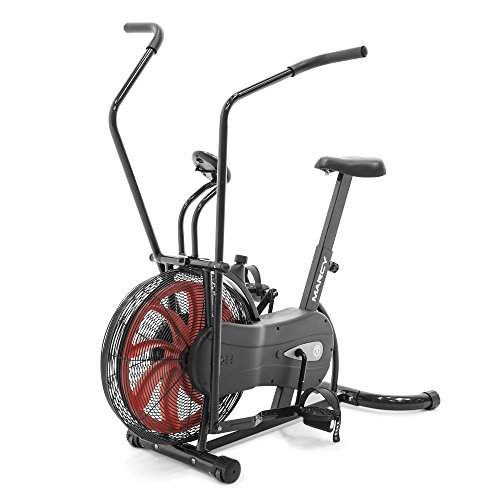 Fan Bikes vs Other gym bikes

What’s the difference between air bike and exercise bike?

While they have some things in common with regular upright indoor cycles – you’re sitting down and pedalling, there’s a world of difference between these machines and regular indoor training bikes.

So, are air bikes worth it?

In addition to being an extremely effective and safe cardio machine, what we really love about the Airbike is that it’s helped us to smash through training plateaus in the past.

We’re sure you’ve experienced that block to your progress, the frustration of smashing out workouts but them seemingly making no difference to your ability. The Air bike was our saving grace and provided a way to shake up what had become stale.

Overall, the Airbike offers a top tier workout that can’t be beaten but it’s one of those things that needs to be experienced first-hand. Hopefully, this post will have piqued your interest and you’ll try it for yourself.

Be sure to get in touch if you do, we really enjoy hearing about the relationships that people have with Airbike!