Home
Guides
Water-Resistance Rowers vs. Air Rowers – Which is Best for you?

You might have heard of rowing machines and their effectiveness in getting your heart rate up to tear through body fat and help you build endurance. But you might be stuck in making a decision between buying a water-based rower or going for an air rower (these are the two of the top contenders when it comes to rowers).

Rowing machines are great for aerobic workouts and they work all the major muscles in the body all at once and they help keep you in shape. More so, they’re a safe option for all levels of fitness and people of all ages.

But there are some key differences between the two main machines and you have to consider these differences before making your final decision. 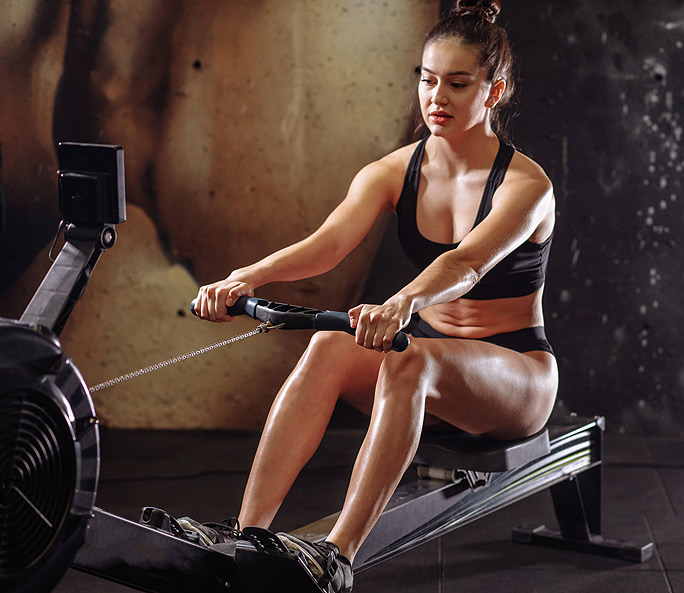 Rowing machines certainly aren’t cheap! With that in mind, this guide will get you up to speed and identify the key differences between these highly popular types of rowers.

Water rowing machines: beautiful, serene-sounding … but are they any good?

The water rowing machines are exceptional in producing a strong, quiet resistance. They have a large tank at the front with a seat rail, the tank also helps in giving the rower some level of stability due to its position.

The popular brand “WaterRower” makes a lot of people believe the rowers are made from wood. But there are different styles and models of rowing machines available today at different prices.

Let’s look at some of the characteristic features of water rowing machines and how these features influence the operational efficiency of the rowers.

From sexy wood to futuristic designs

It’s hard not to be impressed at the sheer beauty of wooden rowers. And yes, we did say beauty. Hand made from choice cuts of the best wood, these machines look absolutely stunning. When most people think about water rowing machines, they’ll bring to mind the traditional rowers in a wood finish. 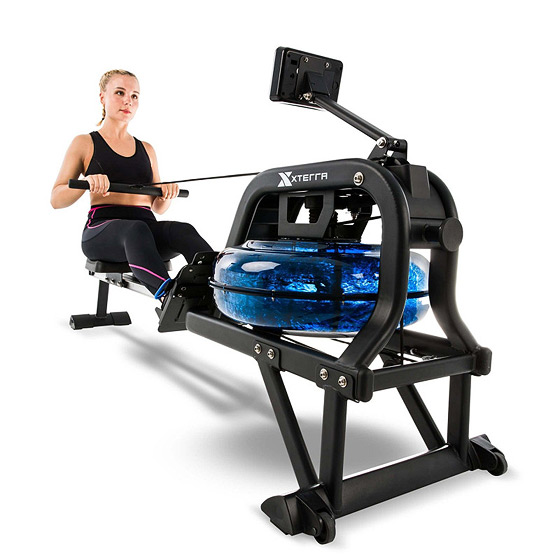 A water rowing machine (they’re not all wood!)

But wood isn’t the only game in down any more. You can often save some money if you’re not dead set on a wooden water rowing machine. Slightly cheaper alternatives are available in a more traditional gym-style metal tube design. They do the same job, just with different materials.

Are they as good as the wooden ones? It depends on your budget and if you really like the more natural look. For our money, the wooden ones are the way to go.

The monitors – all washed up?

Monitors are a massive part of a rowing machine.   For the job monitors do, there isn’t a rowing machine without one. Unfortunately, water rowing machines come with less-than-ideal monitors, especially when compared with air rowers.

The accuracy of the monitor on your water rowing machines increases according to the price of the rower as higher quality rowers are fitted on more expensive wooden rowers. Despite the increase in quality of monitors with the price on water-based rowers, they still are not as good as those found on air rowers.

The Series 4 (S4) is the best monitor you can get on a water rowing machine. And you can find it on water machines from the popular WaterRower brand machines. This monitor has many features like distance, watts, heart rate, 500m split, and lots of other cool features that make it the best monitor on water-based rowers.

Surprise, surprise: the resistance on water-based rowers is provided by water. This machine has paddles suspended in the water tank at the front part of the machine. You will have to pull the handle attached to the “rowing strap” that spins the paddles inside the tank.

The water moves as the paddle spins, and this creates resistance. So, you will need some level of force to paddle. As you move row faster, the paddle moves faster, creating more resistance.

The idea is “the faster you row, the more resistance produced and the more force you need to apply.”

The idea is simple water-based machines do not have any resistance settings, so the faster you row the more resistance you experience.

As stated earlier, water-based rowers come with a water tank at the front, you can increase or reduce the quantity of water in this tank. And you should know that the water level influences how the rowing stroke feels.

There are instructions on how to fill the tank and to what level to fill it up to. This level largely depends on the age of the rower and their ability; apparently, there are different levels for everyone.

(The instructions on doing this is written in the machine manual. )

You will be making a big mistake if you think adding more water will cause an increase in resistance. This statement is wrong.  The resistance is related to speed. Yea, the faster the speed, the greater the drag/resistance and the harder you need to work.

Let’s look at a quick outline of the advantages of water rowing machines:

While there are some things that’ll make you love water rowing machines in an instant, there are some drawbacks here too, sadly. Here are some of the cons to opting to buy a water resistance rower.

Having a blast with Air Rowers

Just like the water-based rowers, these machines also mimic the resistance felt while rowing on water. However, air rowers can record speed, power, and distance far more accurately than the water variety.

The advanced monitors they carry makes them more popular in the fitness community. Besides, that’s the major reason why the Olympic athletes prefer the air rowers for building resistance. 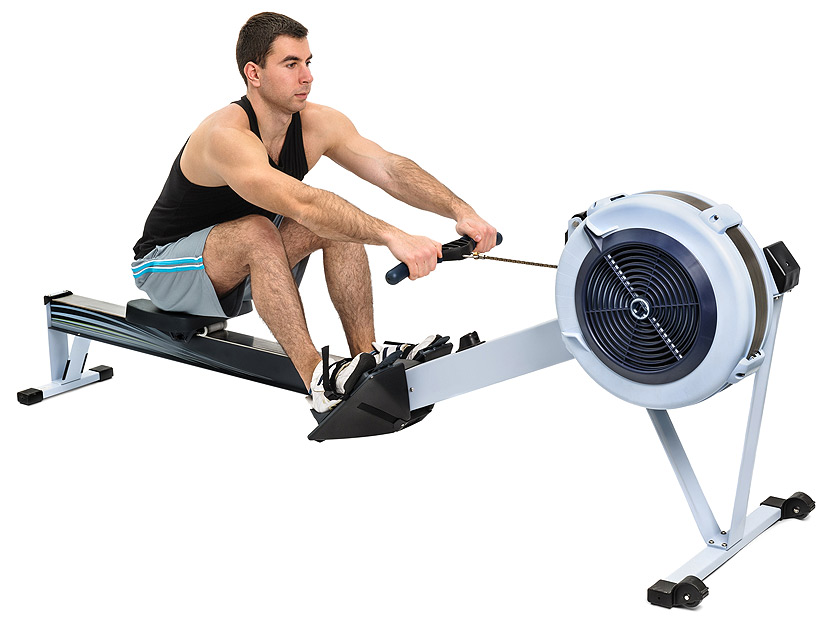 Getting to know air rowers

Let’s discuss some of the characteristic features of air rowers and how these features influence the – operational efficiency of the rowers and of course how they affect your use of the machines.

But when the monitors on low-end air rowers are compared to those on low-end water rowing machines, they’re always better than their water-based’ counterparts.

The PM5 monitor is professional quality

The best monitors in the entire market of rowers are monitors found in some air rowers. Presently, the best monitor on the market is the Concept2 Model D PM5. It records variables like 500m split times, distance, watts, force curve, and pace boat. This monitor can calculate the deceleration of your flywheel with every stroke and determine the amount of work you’re performing.

Factors like dust build-up, humidity, and elevation do not influence the data recorded and displayed on the monitor.

More so, monitors like the PM5 are capable of comparing times and race against each other. That’s more reasons why world records, Olympic rowers, and indoor rowing competitions make use of air rowing machines (specifically Concept2).

What exactly is air resistance?

This kind of rowing machine builds resistance through the action of air. They operate in a similar fashion to water-based rowers in that they both follow the laws of “fluid dynamics,” with the fluids being either air or water.

The working principle involves a user pulling a handle attached to a fan flywheel. The user spins the flywheel as they perform a rowing stroke. This moves the air particles and causes resistance against the fan.  You need “force” to spin the flywheel.

This means that the faster you row, the more resistance you create. This also agrees with the “Rule of Cubes” described above. There’s an exponential relationship between resistance and speed.

How do you control air resistance?

You can control airflow to the flywheel of a rowing machine with a “damper.” The dampers have settings options that permit different amounts of air to interact with the flywheel. This can be likened to changing water levels in a water machine’s tank.

For example, when you move the damper setting to 1, it allows only a small amount of air into the spinning machine. This means less inflow of air particles to interact with the flywheel. You will feel lighter rowing strokes in return.

But when you move the damper settings to 10, for example, it allows a large amount of air into the flywheel, thereby creating more interaction between air and the flywheel, and this causes “heavier” feeling strokes.

You can simply view the damper settings like a bicycle gearing. It impacts the rowing feels but not the resistance. So, the lower damper settings can be likened to the easier gears on a bike.

Not all air rowers are created equal

As we mentioned previously, while water-based rowers don’t normally have budget versions, mainly due to the expensive manufacturing process required, the same isn’t true for their air-based friends. You can get an air rower starting at around £200 mark.

There are some of the positive characters of air rowers that could make it your rower of choice, these are the advantages of air rowers:

While these are practically two different types of rowing machines, the fact remains their job is still the same, they help you achieve your goals. For this reason, there are bound to be some similarities between air rowers and water machines, some of those similarities are outlined below:

Differences between water-based and air-based rowers

Both rowing machines can have high and low-quality monitors depending on price, but the best monitors come with air rowers. If you want to track data, compare times and racing, then you can opt for the air monitors with an advanced monitor.

Water rowing machines are quite more expensive than the air rowers. You can get the lowest models of the water ones for £700 and the best models cost at least £1,100. But the air rowers are available in all price ranges starting from $300 and going high up to $1,000+. The low price of the air rowers make them a very popular option.

It is quite hard to determine the “stroke feel” of each resistant type, and that’s because it is dependent on the models of air or water-based models you’re comparing. However, water rowing machines produce stronger “catch” that lightens as you approach the “finish,” while the air rowers produce a lighter “catch” that increases as you move to the “finish.”

That being said, both machines produce a stroke feel but the difference can only be noticed by advanced rowers. So, you will need to row a lot to be able to spot the difference.

Noise level: Water rowing machines produce a splashing noise in the tank, but this noise is a lot quieter than the noise produced by the fans of air rowers. The air rower is not a great option for you if you like quietness when rowing, watching TV while rowing, live in apartments, workout out early in the morning, or have sleeping children.

Hopefully, we’ve covered the basics of the differences between the two main forms of rowing machines out there. If there’s anything we have missed, please ask in the comments (we’ve been trying out and writing about rowers for a good while and might be able to answer your query!)

In a nutshell, water rowing machines should be your preferred choice of rowing machine if you need it for casual rowing purposes at home or elsewhere as it is just good enough for an average rower to achieve their goals.

On the contrary, if you want something a bit sophisticated for professional use or more complex use, then the air rower should be your choice, despite its noise it offers more features to the users than the water machines.