I was looking for something I could take on holiday that would mean I didn’t have to find a hotel gym when I got there. Having had mixed results finding gyms in Spain, I wanted something reliable where I wouldn’t have to worry about getting out of shape while travelling.

Water dumbbells were something I was vaguely aware of but also suspicious about. They do sound a bit crazy, right?

In this review I’ll cover my experience buying and using some of the water weights on Amazon and whether I think they’re any good.

I bought the CB Sports Adjustable Water Travel Dumbbells which are available on Amazon. There are a number of different sellers of this product. I went with the cheapest one, as they’re basically exactly the same item.

Cut to the chase – were they any good?

Mostly, Yes and a little no.

On the upside, they’re eerily lightweight and literally will barely add a few grams to your suitcase. You also get 8 ‘plates’ to play with and it’s definitely possible to get a proper workout using them. 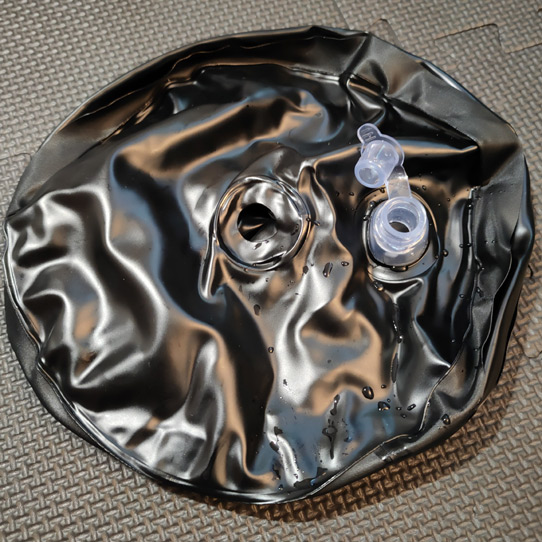 The dumbbells hardly weigh anything when empty.

However, filling them is a pain and they’re a bit on the bulky side to use. They’re also a poor relative of something like a rubber dumbbell. *

* But good luck getting one of those in your baggage allowance.

What exactly are water dumbbells?!

Water weights are resistance training equipment that uses plain old tap water to provide the weight. They have a plastic handle, and the separate plates are filled with water and slotted onto the end of the handgrips. 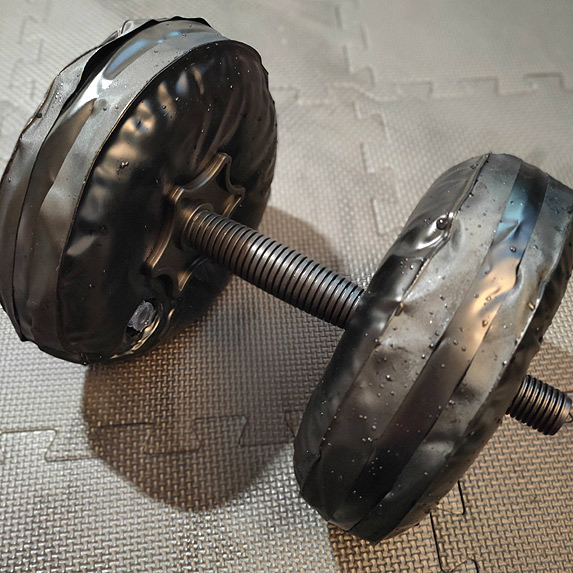 Here’s one of my water dumbbells, filled up and ready to go

You get two bars and 8 plates in this set with each filled plate weighing up to 2kg (I weighed it), depending on how much water you get into them.

The idea is they’re completely portable and can be taken in the car, in a suitcase or backpack, and filled with H2O when you get to your destination.

These dumbbells use the spin-lock system where you get a large plastic bolt to ‘spin’ onto each weight that keeps them in place. It’s a fairly short thread so it doesn’t take long to swap weights.

You can make dumbbells sets of 4kg, 8kg to and 12kg (although it won’t be 100% accurate as this is water squirted in from your tap!)

The instructions state you can get 3kg of water in each plate, but when I weighed mine, it came at a few grams over 2kg. If you’re looking for something a bit drier, check out our guide to the best adjustable dumbbells.

Filling the weights with water – a bit messy 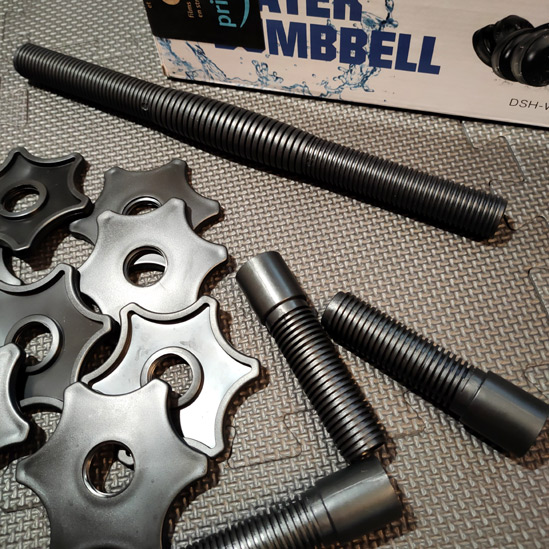 The box comes with 8 empty plates, two bars and lots of spin locks!

The instructions that come with the water dumbbells were a bit rough, to be honest.

There are full-colour photos of what you’re meant to do but the text is really broken English.

Having said that, this isn’t rocket science: pull out the rubber stopper, fill with water, bung the stopper back in (fast).

One example that made me laugh out loud in the instructions was to do with re-inserting this plug. After telling you to fill with water and insert the stopper, it states:

And it was a test. Not a dry one either.

There’s a large plastic inlet similar to the ones you’ll find on a beach ball. You hold this under a tap as best you can. The instructions mention and show a valve that’s not in the box, which was a bit odd.

The inlet isn’t very wide and, as such you have to awkwardly hold the dumbbell under the tap to fill it. The downside to this is it never feels as full as it could get.

If your sink allows, your best bet might be to lie the empty dumbbell on it’s back and let the tap pour into it, rather than trying to make a seal with the tap, which proved a bit messy for me.

But they don’t leak!

Dodgy instructions aside, the dumbbells aren’t too hard to get at least most of the way full and the plastic plates are fairly tough. Best of all, they don’t leak (or haven’t yet!) Once the sturdy stopper is in place, there’s no leakage when you’re exercising and the dumbbells at least seem to hold their water.

A quick tip that’s easy to miss in the instructions

You’ll notice in the box that you get several spin lock bolts. I think you’re meant to put one of these in between each water plate you add on. 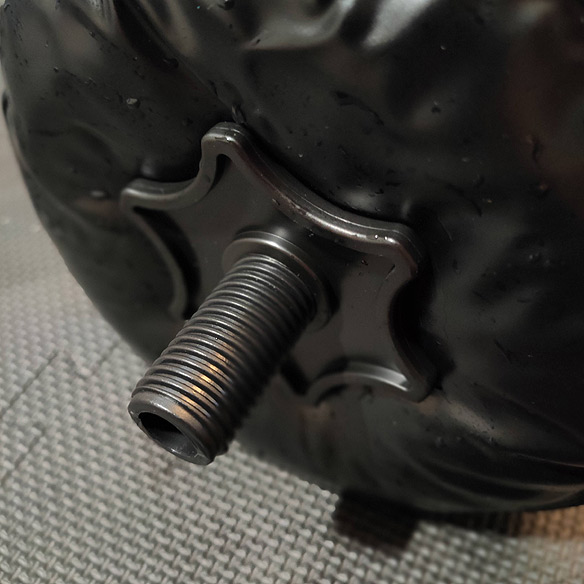 Fasten the locks down to make the plates feel less squishy

The benefit being it will squish the plate down and create a better shape for the dumbbell as well as letting you have more space for your hand to grip.

What are the best things about water-filled dumbbells?

I love the concept

It’s great doing running on holiday (when it’s cooler at night, anyway!) But I always miss resistance training. The idea that I don’t have to and the design of these water dumbbells is a good one.

I paid around £35 quid for my water dumbbells. Compared to most other resistance training gear, they’re not expensive. I think I’ve paid more than that for access to a gym when I’ve been on holiday before.

For what you get, it seems like good value for money but I’ll have to see how well they last. If they pop and spill water all over the villa, I might change my mind on this one!

It would have been pretty easy to just have one weight you fill with water but having 8 separate plates means you can alter the weight depending on your strength and what you need.

The plates are fairly easy to get on and off.

I’m guessing too that you could fill the plates half with water and then top it up by blowing air into it if you needed a lighter weight. 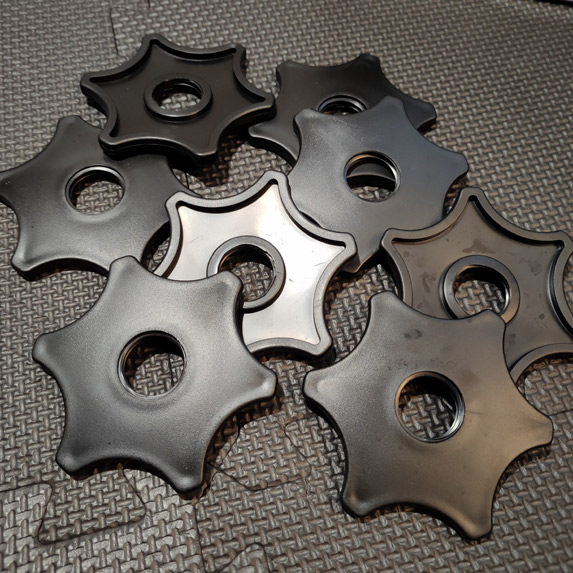 You get plenty of spin locks in the box – use one on each side of each plate.

I handed the un-filled ‘plates’ and bar to someone who was in my house at the time I was testing these dumbbells and we were both impressed at how light they are. I’ve no idea how a plastic bar can be as light or as tough as these ones are.

And the plates are literally the same material as an inflatable you might buy for the pool.

Super portable, then and ideal for taking away with you.

You get attachments on the bar to use as a barbell

Using the extra attachments that came in the box, I was able to combine the bar pieces in a number of ways. One of which made a shortish barbell that lends itself to the clunky sort of plates and lets you do some good barbell curls.

I’m going to compare these to regular dumbbells and say that they’re definitely on the bulky side. This isn’t a huge issue and you can do your bicep curls, shoulder press, rows, deadlifts and pretty much every other exercise.

They look a bit goofy but, overall, not too bad.

A bit awkward to fill

As I mentioned at the start of this review, filling the dumbbells from most taps isn’t the easiest thing in the world and my dumbbells didn’t look as firm or as gym-like as the ones in the pics I’d seen. Having said that, they don’t look bad!

You’ll likely be splashed doing this so don’t leave your phone in your pocket or on the bench next to you. I guess this could keep you cool on holiday!

Not sure about how the product will last long term

OK, bit of a cheap shot as I’ve not had any problems with my aqua dumbbells yet!

I’ve not used this product for more than a week so I’m not sure if it will last. Maybe it will! But this is a plastic beachball-style dumbbell plate so I’m not sure how long it will be before it springs a leak! Something new to dumbbells for me anyway!

The other plastic parts actually seem robust so I’m not too concerned about them. I’ll update the review accordingly later on.

Using water feels a bit light to me

Maybe it’s just because I’m used to my beloved Hex Dumbbells at my home gym but these weights look pretty big but obviously water weighs less than iron. I put 4 plates on and although they were pretty large, I was only getting around 12kg.

I’m not sure there’s a heavier set available, but something to bear in mind. Oddly enough, I neglected to check the weight prior to buying, caught up in the excitement of these water dumbbells.

And a bit sloshy and squishy…

Another downside to water compared to other materials is that it sloshes around a bit while you’re lifting (especially if you put some air in the water plates). I did have the idea to freeze the plates but I’ve no idea if that’s a ‘done thing’, or if it would damage the plastic on the plates over time.

The Verdict: Should you buy these water weights?

Overall, I’m happy with my purchase of these water-filled dumbbells.

Once you get past the slightly messy process of getting them filled, you can definitely manage a pretty comparable workout to what you’d get with some ‘real’ dumbbells.

Sure, they’re a bit cumbersome and water is a poor substitute for metal, sand or concrete-filled plates but concessions have to be made for what they are – a cheap, portable way to get a workout on holiday.

If you’re travelling soon and don’t fancy chancing the hotel gym, they could be a good solution that you can easily pack.

Verdict on the Water Filled Dumbbells

If you’re stuck for a weight to do resistance training when you go travelling, or on holiday then these water-filled dumbbells might just be worth a look. They’re ridiculously light weight, offer a decent way to workout and aren’t exactly expensive.

On the downside, water is probably not the best filling for a plate I’ve tried and they’re definitely a bit on the bulky side once filled.

Overall, a decent solution, of not a perfect one.