Skip to content
Home › Reviews › Viavito Sumi Review: How does this budget folding rower stack up?

Welcome to our Viavito Sumi review!

Can you get a rowing machine at a budget price point – that’s actually any good? This review of the Viavito Sumi rower looks at one of the lower-priced rowers, aimed at the home fitness market and offering similar features to the ‘big machines’ out there. So how does this cheap rower fare in comparison?

Warning: This review will contain both GOOD and BAD opinions on this machine. 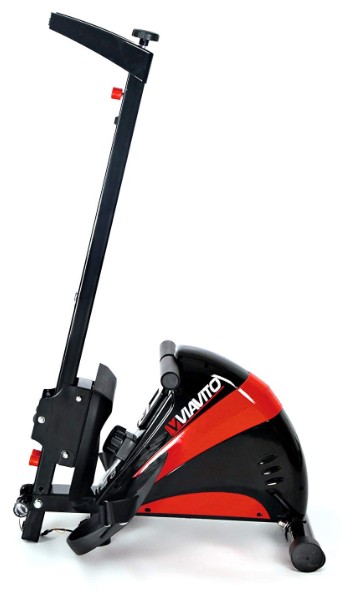 Unlike a lot of reviews – this is a real one that will cover both GOOD and BAD stuff you should be aware of before you buy this rowing machine.

We want you to find the perfect machine that’s going to get you in shape. Let’s dive in!

What does this machine actually do?

The Viavito Sumi is a folding rowing machine that’s designed to be used at home. It’s a seated exercise machine which you row and it will work out all major muscle groups.

Rowing is one of my absolute favourite exercises and I row a ton each week. It builds strength, fitness and is one of the easier forms of exercise, with no strain on your joints, or impact.

The Viavito Sumi sits at a sub £200 budget price point, in a market where rowers such as the much-loved Concept 2 rower (Amazon UK) can run anywhere around the thousand-pound mark.

What will the Sumi rower do for you?

The Viavito Sumi machine aims to do the following:

Rowing itself is the perfect exercise for people of all levels because it hits pretty much every main muscle group. There are all kinds of other crazy exercises you can do with your rowing machine too. Just check Youtube for some examples.

Here’s a quick ‘n’ dirty run down of the main features you can expect if you opt for this machine: 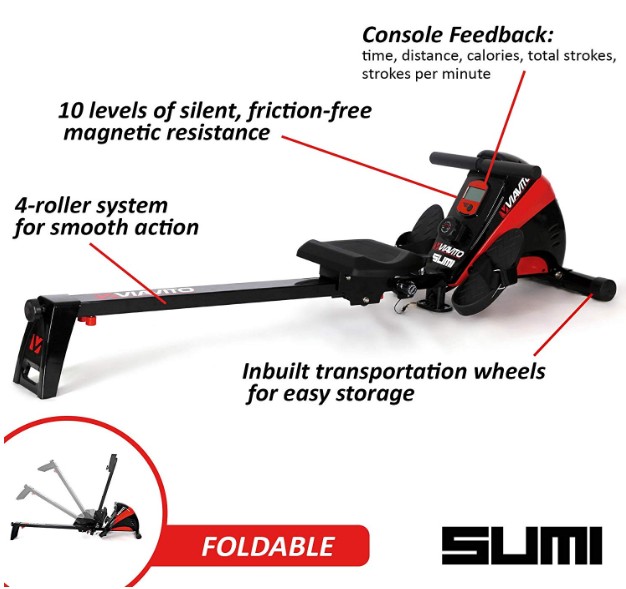 The Sumi has a decent design quality, with glossy black and red flywheel house and black gloss coating on the rest of the components.

Construction-wise, the Sumi is made from tough steel tubing and can support weights of up to 17 stones. (Users have reported it being fine above that weight). Like every decent rowing machine, this one can be folded up and stored away in between sessions.

The GOOD: What the Viavito Sumi gets right 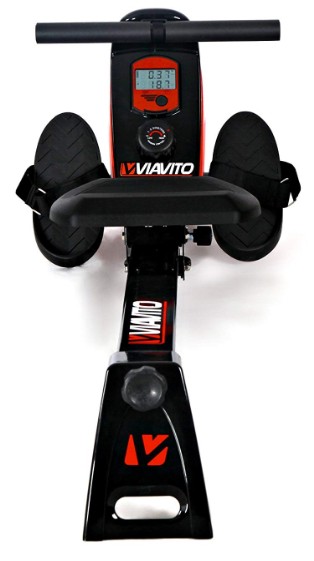 One area I would say this budget rowing machine can hold it’s ground is definitely in the noise department.

The Sumi is wonderfully quiet, thanks to its magnetic resistance. It’s way quieter than the Concept Two and other air rowers, and makes less noise than a water rower (although who doesn’t love the swoosh they make?)

This rower won’t disturb anyone, so if you’re looking for some kind of quiet exercise machine for home use, this could be a good buy.

Easy to move around… and no cables!

Another good point with this rower is it’s easy to move around and store. Bar a gripe with the wiring (see below in the ‘bad’ points) this rower is ideal for moving off into a corner after use. The Viavito Sumi has nifty little transport wheels underneath it so you can simply wheel it out the way when you’re done.

You don’t need to plug it in either. There are no cables so you won’t need to think about where the nearest power outlet is.

Phew: the console and display are actually OK

Having reviewed a lot of not only budget rowing machines, but other fitness machines under the £200 mark, I’ve learned to prepare for the worst when checking the LCD displays. There’s some terrible displays around.

The Sumi does a good job here though, for the price anyway.

While the display can’t compare with more expensive machines, in terms of the number of stats and complexity of the info, it’s by no means bad.

You can track calories, strokes, distance, time – all the important basics. But what makes the Sumi’s display stand out is that it’s a pretty good size, with nice chunky digits you can get a quick read on while you’re rowing.

Another thing that sets this display apart from other ones is it actually shows more than one spec at once. Overall, for the price, happy with the display!

The Sumi is a smooth mover

Some budget rowing machines have god-awful rowing action that’s either marred by awful grinding motion or cheap and nasty friction resistance. Not so with the Viavito Sumi. Its motion is surprisingly smooth for a cheaper machine and has a slick feel to it.

Adjusting the resistance is easy 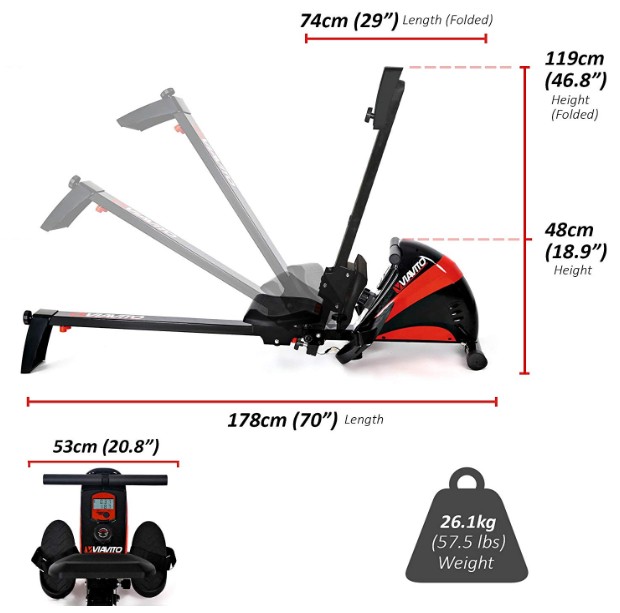 One thing that really bugs me about some rowing machines is that you sit down, get strapped in, and then you forgot to set the resistance.

But you can’t reach it without getting out of position and reaching over. It’s not just budget machines that are guilty of this either!

Thankfully, the Sumi has a handy big dial that you can reach even once you’re strapped in. It’s manual and I’m fine with that. Give me something simple any day.

You just turn the dial to increase resistance. And it does a good job of increasing intensity and making things a bit more sweaty.

Putting this machine together is straight forward

While some people are good at putting seemingly anything together, the rest of us mortals dread anything requiring self-assembly. DIY-haters need not fear the Viavito Sumi – it’s straight forward to put together. The instruction manual here is English, has clear diagrams and is easy to follow. 30 minutes tops and you should be good to go.

The BAD: Things that could be better on the Viavito Sumi

OK, that’s the good. Now let’s get to the nitty-gritty. What sucks with this machine? Where does it fall flat?

The wiring could be better…

A bit of a design flaw in the way the wires that run from the track sensor to the console are positioned. They just hang down and they’re a bit flimsy. While it’s not an issue at all when you’re rowing, problems could arise if you fold this machine repeatedly (which a lot of people will).

Folding isn’t as easy as some other machines

While folding the Sumi isn’t hard by any means, you do have to unscrew the large dial each time. It’s a bit of a faff on and would have been better if it opted for a different design. I really like the way something like the Ignite Air handles folding, where it breaks quickly into two parts.

Not a deal-breaker exactly, but something to consider.

Paint can flake off the main body

One problem with the Viavito machine is that the coating on the main body is susceptible to scrapes, bumps and knocks. That bright, glossy coating can be scraped off if you’re not careful. Although it looks nice when new, it wouldn’t take much to make it look shabby.

The LCD display’s position is fixed

One thing I like about the Concept 2 rower on Amazon, and some of the other ones I’ve reviewed and used, is that the display is higher up and can be swivelled around to match your eye level. the Sumi’s display is fixed to the main body. Having said that, it’s easy to read and this one could be filed under ‘minor niggles’.

Conclusion – should you buy the Viavito Sumi rowing machine?

If you’ve made it this far, or just scrolled down for the verdict, here it is. The Viavito Sumi is a great rowing machine for the price. If you’re looking for a machine you can use at home but don’t fancy splashing out on a thousand-pound machine just yet, there’s a lot of really good points with this rower.

It’s solidly made, fairly quiet and has a smooth rowing action. It’s suitable for different levels: people looking to get in shape, or more experienced home exercisers looking for some work!  Very experienced rowers may require a more challenging machine, however.

The Sumi doesn’t take up too much space and is easy to store, bar the screwing in and out of the dial mentioned earlier.

Verdict: If you’re in the market for a sub-£200 rowing machine, definitely check out the Sumi. It’s solid, works well and has a lot to offer.

Full Features of the Viavito Sumi

Here are some common questions on the Viavito Sumi. If you’ve got any more, fire us an email here, or use the comments below.

Does it come already assembled?

No. The Sumi requires a bit of self-assembly (more on that below).

Is it hard to put this rowing machine together?

No. You’ve got a choice of the included instruction manual or the video below. It’s not hard to do, even if you normally hate putting stuff together. Expect to spend around 30 minutes assembling the Viavito.

Some tips on assembling the Viavito Sumi

Unlike a lot of gym gear, the Sumi won’t cause any major hair-pulling when you’re putting it together. Here are the steps you’ll need to get this rowing machine up and running. (Or there’s a video below too, if you’d prefer to follow along).

Everything you need comes in the box, including the tools.

Unlike a lot of fitness machines, there is the right way and a wrong way to use a rowing machine. It’s well worth spending a few minutes learning the proper form before getting started. Here’s a handy guide on what you actually do on a rowing machine.

More from this author

Home Gym Experts is a participant in the Amazon Services LLC Associates Program, an affiliate advertising program designed to provide a means for sites to earn advertising fees by advertising and linking to Amazon.co.uk. Product prices and availability are accurate as of the date/time indicated and are subject to change. Any price and availability information displayed on Amazon, or any retailer featured on our website at the time of purchase will apply to the purchase of this product.