Welcome to our guide on the best battle ropes you can get in the UK in 2022. If you’re new to this kind of training, be sure to check out our buyer’s guide at the end of this article. You might not know you can get fitness ropes for home use, but they’re not hard to set up and have enormous benefits to strength training and your body toning.

Separating out the real battle ropes from the pretenders: what we look for

There can’t be much to a rope… can there? Here’s some things we use to decide if a fitness rope makes the grade. 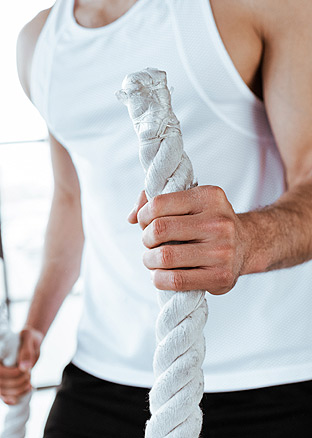 The best battle ropes for your home gym in 2022

Before the buyer’s guide, let’s go over the current top battle ropes out there in 2022. Here are the ones we found were actually worth the money, starting with the top pick first.

See it at Amazon UK > 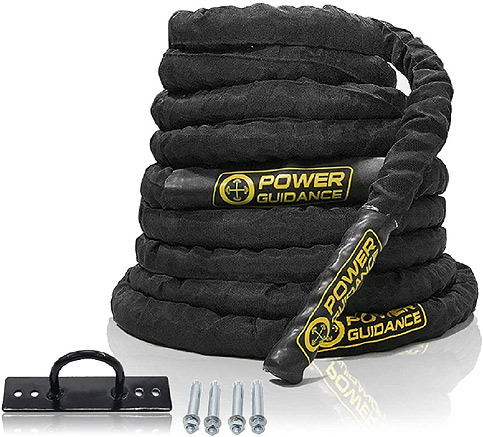 With some of the most 5 star reviews we’ve seen on Amazon, Power Guidance’s ropes swing into action carrying some high expectations. So are they any good? To put it bluntly, they’re the single best battle rope set we’ve seen. There’s just so many options available here that no matter what you’re looking for, you can find your perfect set up.

First off, there’s a huge amount of variety in the ropes here, with all three standard lengths on offer. That means you can tailor your rope to your gym set up, and make sure that it’s going to fit perfectly, no matter what. There are also two thickness options, though as we mentioned in our buyer’s guide, most people are going to want the thinner, 1.5 inch option.

Second is the quality of the material. Unlike most other choices, these ropes are 100% Dacron. That makes them incredibly tough and hard wearing. This rope is coated in a fetching nylon sleeve which is more hygenic and will help protect the rope. You’d have to do something drastic to this rope to make a dent; it should last you for years.

The rope is sleeved at the ends with 25cm handles that are guaranteed never to come off, and there’s also a rope guard at the centre, to protect from friction damage against the anchor. Finally, the kit comes with a reasonably standard anchor. All of this, for a surprisingly low price.

Verdict: Power Guidance actually isn’t the most expensive rope we’ve seen, but it is, so far, the best. It’s heavy, built to last and the nylon coating protects it from wear. This is a great fitness rope for any home gym. 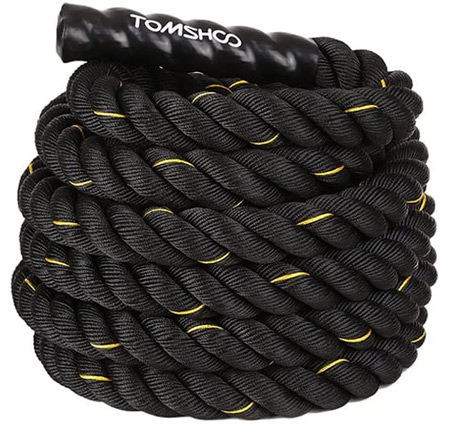 Tomshoo battle ropes – as gorgeous as a rope can be

If you think all heavy ropes are pretty much the same, you haven’t had a go on a Tomshoo. If there was a luxury brand of fitness ropes, this would be the one. They’re heavy, ridiculously tough and just have a fantastic feel about them.

Like any posh product, you can customize ’em just how you want, with a choice of 3 lengths and two different grip widths. Some of the things you can’t get from pictures are how well the rope lies. Unlike a lot of ropes, you won’t constantly have to untangle it, and it doesn’t get itself twisted either.

The polyester rope seems tough and built to last which is important considering a lot of heavy ropes are prone to fraying. It’s not hard to wrap up at the end of a good session either, well relatively speaking. The more floppy feel of the rope means you won’t have too much trouble coiling hte thing up again (other than the normal struggling with a 13kg giant snake of course).

Verdict: Tomshoo’s rope looks good and is incredibly well-made. Although you can get cheaper products, there’s no denying it’s a heavy beast that takes it out of you. A fab rope that should last you a long time. 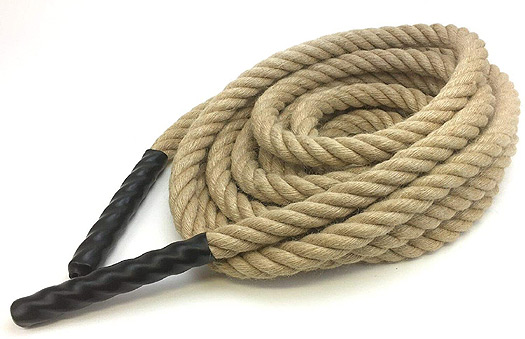 Made from natural, organic jute fibres, this rope is perfect for people looking for a more rustic, old-school feel for their gym, or if you’re particularly concerned about your environmental impact.

Every rope is hand made to order, with a wide range of lengths and thicknesses available. The natural fibres are tough and hard wearing, with adhesive shrink tubed ends that are simple to hold and easy on the hand

Personally, we prefer synthetic fibres to natural, just because they’re longer lasting and normally cheaper. But if you insist on the natural, these are a solid choice.

Verdict: These ropes will remind you of your old school gym! They have a great natural feel to them and they’re completely natural and organic. Considering they’re all hand made, they’re cheap too.

That’s the end of our list. Hopefully, now you’re closer to making an informed decision about the gym ropes you’re looking for, and you’ve found the right one for the job.

Next up, we’ve got a buyer’s guide packed with handy info for anyone all tied up about which rope they need for their gym.

The Big Benefits of Battle Ropes for Strength and Conditioning

What are battle ropes? 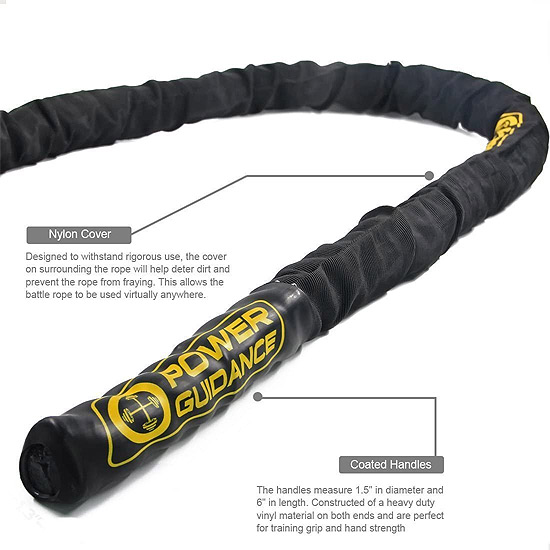 Battle ropes can come with a cover, or with a more natural look.Above: Power Guidance ropes, Amazon UK

Picked up as a tool by crossfitters and elite level athletes the world over, battle ropes are becoming far more popular as a method for packing on lean muscle, boosting your cardio, and blasting your whole body.

The equipment itself is simple. A thick, heavy rope anchored down at a point, with both ends of it held in your hands.

Then, you can whip, wave or slam the ropes up and down, which, after a minute or two, really starts to burn.

Why are battle ropes so good?

Battle ropes are a fantastic tool for a whole bunch of reasons, which is why they’re becoming far more popular in gyms and fitness clubs all over.

At first glance, battle ropes might all seem the same. At the end of the day, it’s a thick piece of rope that you shake, right?

Well, yes, but also no. There’s a surprising amount of variables in a battle rope that can affect how you exercise with it, which come down to three main things: Material, length and thickness.

Lets unravel how you can pick a set of ropes that won’t... unravel.

Almost all battle ropes will be made from one of two materials:

Manila ropes are made from Manila hemp, and they’re a fantastic all round choice. You get solid weight, a strong rope, and they’re organic and environmentally safe, too. They’re also the more traditional option, and just look cool. But Manila ropes are falling out of fashion for a few reasons.

They’re more expensive than synthetic ropes, they’re more susceptible to damage, and every time you use them, the surrounding area is going to be covered in tiny strands that are knocked out of the rope structure, which takes a crazy amount of clean up if you’re indoors.

Poly Dacron ropes on the other hand are made from synthetic polypropylene and Dacron fibres wound into cables. Polypropylene provides a strong but lightweight core, with Dacron offering all the strength. 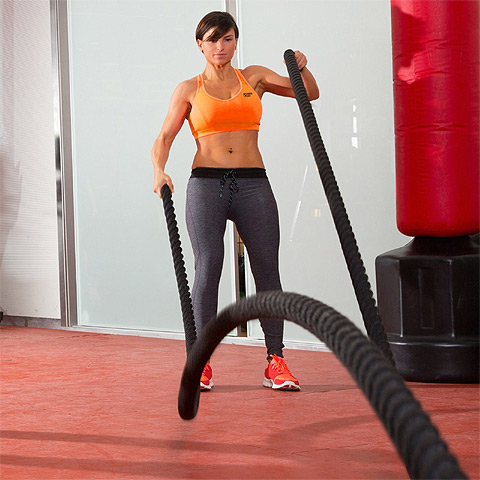 The downsides with synthetic polydac ropes is quality. Cheaper ropes will have a low Dacron content, which causes the ropes to be weak and lightweight, and much less effective to use.

It’s also worth pointing out that synthetic ropes will be very tough the first time you get them out of the box and set them up, but after a few workouts the fibres will soften and become fluid and flexible.

What length battle ropes should you get?

Battle ropes come in multiple different lengths, and the overall length is going to have a big impact on your workouts.

Standard lengths are 30ft, 40ft, and 50ft, (9m, 12m and 15m.) In general, it’s better to aim for longer lengths, as that leads to more flexibility and fluidity in the rope as well as more weight, so means a much more effective workout. But it’s also important to consider space.

A battle rope will be folded in half across the anchor point in use, so a 50ft battle rope will realistically need about 30ft of space (25ft of length, plus space for you.) Sometimes, space is at a premium, and a shorter rope is necessary.

It’s also worth pointing out that anchor points are interchangeable. It’s just a metal bracket in the ground, so multiple ropes can be switched into and out of an anchor point at will.

Do you need a big space to use a battle rope?

No, because battle ropes are heavy (if you’ve not tried one, you’ll see what we mean when you do!) You don’t need miles of rope to get a workout. Ropes start at around 9 metres and you’ll be halfing that number remember. And you don’t even have to use all that. As long as you have the full length of even a single-garage, you’re more than good to go.

No everyone wants to drill holes and fix an anchor point to the ground or wall for their battle ropes. Whether there’s just nowhere for it to go, or you’re a DIY-phobe, thankfully there’s some common ways to use battle ropes without reaching for the drill.

People find all kinds of things to anchor their battle ropes around and it could be that there’s something you can already use in your home gym, or in your shed or garage. Just be careful and don’t wrap it round any pipes.

Taking your ropes outdoors is great because it keeps you cool and gives you plenty of room to move around. And if you’ve got a tree in your yard or garden, nature has provided you with the perfect anchor for your ropes. Just be wary that you might damage the bark, or your ropes. You can get sleeves, or use an old towel on the trunk.

One of the best alternatives is a battle rope wall and floor anchor. You can prolong the life of your battle rope by getting a kit like this, or just make it easier to attach your rope wherever you want to. 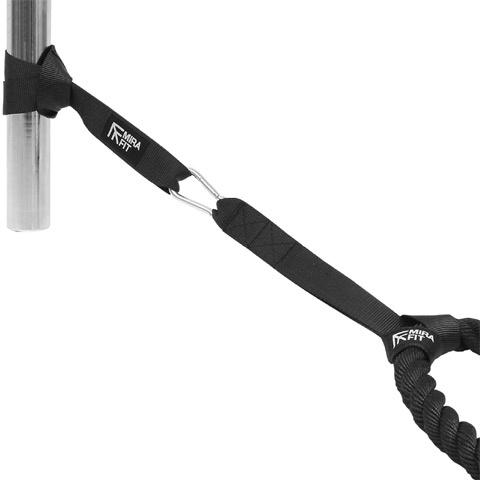 As well as different lengths, ropes can also come in different thicknesses, with 1.5, 2 and 2.5 inch thicknesses as standard.

Our recommendation is that almost everyone buys a 1.5 inch thickness rope, for two major reasons.

One, unless you have shovel hands, larger ropes are going to be tough to wrap your fingers around comfortably, especially after a minute or two. If you’re on the shorter side, a larger rope is basically out of the question.

Two, a thicker rope adds a lot of extra weight, and that’s going to cause you to gas out much quicker, which counter-intuitively means that your workout is going to be worthless.

We won’t go deep into the math, but that extra half an inch thickness increases the total area, and so the weight, of the rope by over 75%.

Lesson? Always start with a 1.5 inch thickness rope and work upwards. Your arms will thank you.