I’ve been dying to get my hands (or should I say fists) on the Strikeman Pro for some time. After owning a BOB century dummy for some time I wanted to see what Body Power’s version of the freestanding punch man had to offer.

What is the Strikeman Pro? 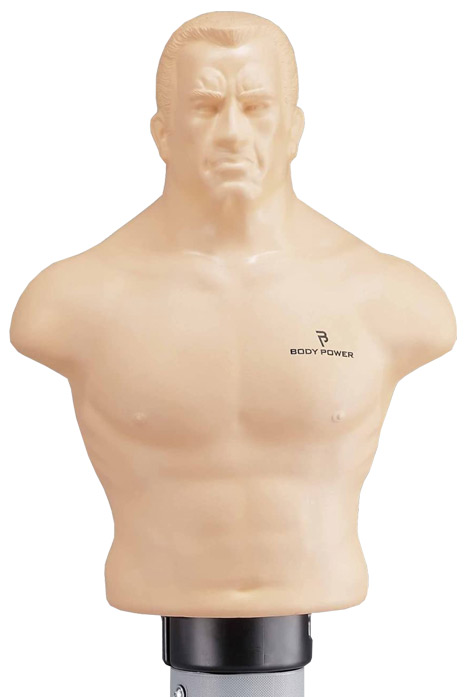 The Strikeman Pro – a free-standing punch dummy from Body Power

The Strikeman is a free-standing punching dummy that’s designed for home gym use. It’s a life-size torso and head made from high density foam. It’s attached to a base which is weighted with a choice of filling.

It’s an alternative to the better-known Century Bob dummy. While it might look odd at first glance, the sculpted body and face are designed to simulate a human opponent. It’s used by boxers training for a fight but is also ideal if you want to do boxing at home.

The torso of the Strikeman Pro is mounted on the bases post and can be adjusted to 3 different heights by twisting and lifting the it up or down. It’s quick to alter the height once you’ve got the hang of it. More importantly, it stays in place when you punch it.

What do you actually do on the Strikeman and other punch dummies?

If you’re into boxing, you’ll know what you’ll be doing on this bit of gear. They’re a regular at gyms and boxing classes around the world in 2021. For anyone new to this form of exercise, you can practice a wide range of strikes:

Above all, you’ll learn more about self defense and can use this training tool to build up cardio fitness and overall muscle strength.

Who are you calling a dummy? Best 5 features of the Strikeman Pro

So here’s the main 5 reasons you’d want to splash out on the Strike man and why you might want to think about getting one in your home gym.

If the Strikeman Pro is extremely similar to Centuries dummy, but there’s a couple of ways it differs. 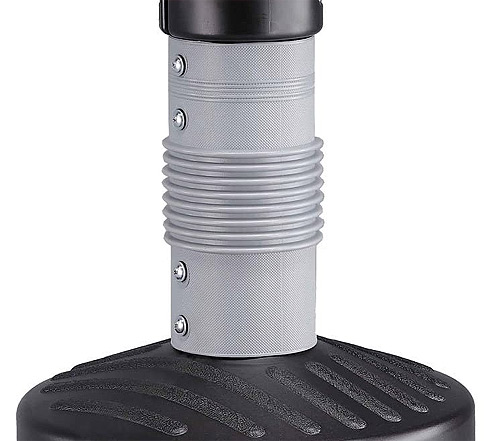 The Strikeman has a flexible post, which is different from the Century Dummy

One of the things I really like with the Strikeman version is that it’s been designed with a large section in the support that yields and bends as you hit the dummy. One of the big problems with any free-standing martial arts targets is they will shift around.

That force has to go somewhere. So it makes sense to have some form of pivot in the dummy that allows it to absorb some of that.

Cosmetic differences – which punch dummy is the ugliest?

Maybe it’s intentional that both dummies have a face you just want to punch. I guess it wouldn’t be much good if they had a cute face, would it? Both dummies offer a fairly detailed, if washed out statue look about them, with chiselled jaw, detailed nose and face.

There’s subtle cosmetic differences in both the face and bodies of each dummy but shape-wise they’re both very similar. The torso is cut off just above the waist. Both have a clear and accurate representation of the human body (albeit a muscle-bound one).,

Benefits of a punch dummy over a punch bag?

There’s a lot of differences between a free standing Strikeman Pro style target and a suspended punching bag. The each have their place in training in your training but here’s some of the pros to using a sculpted person-like dummy.

Practice punches you can’t on a bag

Anyone who has tried doing an uppercut on a bag will know it doesn’t feel good, or work at all really.

Thanks to the Strikeman’s handsome chiselled jaw, you can practice this punch as many time as you want, with a great feedback when you connect.

Whereas something like a heavy back is great for building strength and power, a dummy lets you practice placing your body and head shots.

There are a number of weird-looking punch bags with targets on them but they’re still nothing like the shape of a human head / body. If you’re looking to practice accuracy, get one of these dummies.

One of the best things with a punching dummy is you can set them up in any corner of your home gym.

You don’t need a beam or a stand

It’s great if you move into a house with a huge overhead beam you can hang a punch back from, but not so great if you’ve got a smaller garage or no beam to suspend it from. Free standing gear like the Strikeman are great for those situations.

There’s no messing around and you don’t need an expensive stand. Just fill it up and you’re good to go.

What should you fill your Strikeman Pro with?

The Strikeman pro’s base will arrive empty and you’ll need to fill it up yourself. There’s two main options here: water or sand. To be honest with you, both are a pain in the butt to do so have the hoover ready, or some towels.

Once filled, the Strikeman will weight in at around 110kg if filled with water and a little over that if you use sand. So which is the best? Obviously water is the easy choice but sand doesn’t shift around when you hit the dummy.

There’s space in the cavity when it has water in it which allows the water to slosh around. Sand will mean it shifts around less when you’re punching it.

Using sand? Save some hassle and fill the Strikeman with this stuff

I can’t imagine the horrors of trying to squish wet sand into the hole on the Strikeman’s base. Do yourself a favour and get some proper dried sand. Something like Kiln Dried sand is ideal and can be picked up pretty cheaply at places like Wickes.

How to make it easier to fill the Strikeman

Like the bob Dummy, the hole you pour the filling into is way too small on the Strikeman dummy. One thing I did that worked well was make a makeshift funnel out of an old plastic bottle and sellotaped it onto the opening to get the job done.

This makes pouring either water or sand in a bit easier! Obviously if you’ve got a hose and are going the aqua route, you’re good to go without this step.

Like the other dummies, the Strikeman’s material will yield when hit. But you’ll want to get some bag mitts to protect your hands, especially on the face of the Strikeman.

What kind of gloves should you get?

Protecting your hands when using a punching figure like the Strikeman is important. While they’re less likely to skin your knuckles than a leather bag, you can definitely hurt your hands pretty quickly without the right  protection.

You’ll see people using really large gloves on the dummies but I’d recommend you get some smaller bag mits. Using a big glove has a bit of extra weight but takes away the point of a dummy, which is practicing accuracy.

Smaller gloves give just as much protection but will allow you to hit the right areas on the dummy.

What kinds of workout can you do on the Strikeman Dummy?

Problems and drawbacks with the Strikeman Pro

There’s not exactly a lot can go wrong with these things, but here’s some of the problems you might come up against, and some negatives to think about.

They’re really hard to move around

I mean, punch dummies are meant to stay in once place when you hit them, but if you’re planning to move them around after each workout, think again. Once you’ve filled them with water or sand, you’ll have a hell of a time moving them around.

In one of my classes we did have a set of wheels we used to scoot it into storage after use, but it’s not ideal.

Fill it where you’ll use it

One thing that’s worth doing is moving the dummy to where you’ll be using it. It’s hard to shift around once it’s filled with water or sand.

Technically you can kick these dummies with either a front kick to stomach area or round house under the ribs. But it’s not recommended and definitely not what they’re designed for.

You can easily damage the dummy doing this or, more important, damage you. (I’m not ashamed to admit I’ve tried it and all I can say is ouch…)

Be kind to your Strikeman Pro

You never know, one day they might punch back: