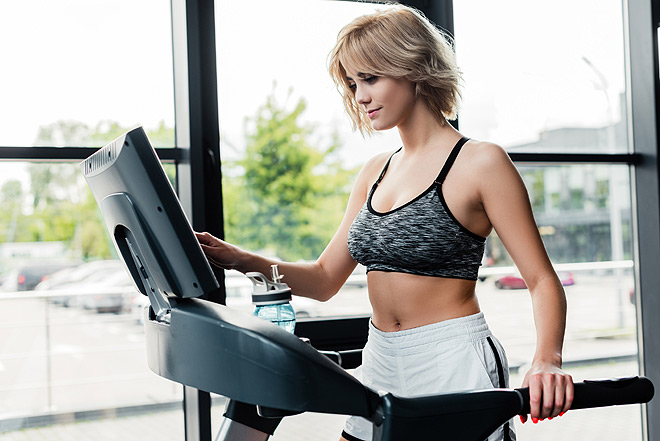 The one exercise that people seem to love to hate is the treadmill. Despite the reputation it has, there are so many good reasons for you to be running on a treadmill that you’re punishing yourself by not doing it.

But like everything, if you’re going to do something, do it right. As with every exercise, knowing what you’re doing before you start makes a huge difference, so here’s ten rookie mistakes you need to avoid when you’re running on a treadmill.

Not warming up is a great idea… If you want bad workout sessions and sore muscles for days after. A good warm up will get your heart pumping, and gives your muscles and bones time to loosen up and stretch.

Plus, warming up actually lets you work out harder, for longer.

It doesn’t have to be hard. A few dynamic stretches and a slow walk for 5 minutes is enough to get you started and ready to go.

Everyone thinks they know how to run, but using a treadmill isn’t as simple as jumping on and sprinting away.

Modern treadmills have a whole host of functions that make a workout much better. If you’re at the gym, the best thing to do is chat to one of the trainers, and if it’s your own treadmill, read the damn manual! Things you should be looking out for include:

There’s two parts to working out properly on a treadmill. Speed and incline.

Running too slowly is a big deal. It might make sense to start slowly, but the faster you run, the more efficient your run is, and weirdly enough the more comfortable it’s going to be for you.

You should be running at a pace that puts your heart rate at around 60 to 80 percent of your maximum heart rate. If you don’t have access to a heart rate monitor, a simple rule of thumb is having to breathe harder, but still able to have a conversation.

Whatever your reason for jumping on a treadmill, incline is your friend

When it comes to the incline, a lot of people probably think that it’s normal to start on a zero degree incline. I mean, that’s a perfectly rational thing to consider.

But running on a zero degree incline on a treadmill is actually like running downhill. You should set your treadmill to a very gentle incline, between 1 and 2 percent. A small incline like this is a great replica for outdoor running, and it’s a much more efficient workout.

But don’t set it too high. Excessively high inclines put a lot of strain on your joints, especially when you’re just starting out.

If you wanna work hard, it’s better to train intervals; short bursts of high intensity mixed up with slower sessions.

We’ve all seen someone at the gym using a treadmill while holding onto the handrails. Don’t do that. The handrails are only there to help you when you’re getting on and off, at the start and end of the workout.

Hanging on to the rails as you run is awful. It forces you to run in a completely unnatural position, hunched over with your arms static. This puts way more pressure on your body, and might lead to back or neck pain.

You should run on a treadmill just like you’d run outside. If you feel like you’re going to fall, you’re probably running too fast, too hard, or on too much of an incline. Slow it down and take it easier, and build up to a faster pace.

#6 – Staring at things that don’t matter

No. We don’t mean the butt of the person doing squats at the other end of the gym.

Whether you’re running on a treadmill or outside, your eyes should be forward, focused on where you’re heading.

Staring elsewhere when you’re running, especially looking down, whether it’s watching your feet, glancing at the console to check your stats, or watching Netflix on your phone, ruins your posture, which makes your run much harder and could lead to long term pain.

#5 – Jumping on when the treadmill is running

The biggest cause of people getting injured on treadmills is getting on and off when they’re moving too fast.

It doesn’t matter if you’re just starting out a session or jumping off for a second to grab a bottle of water. Start slow, get yourself accustomed to the pace, then gradually bring the speed up, and make sure that everything you need is right there with you so you don’t have to take a break in the middle of your sessions.

#4 – Not listening to music

Imagine there was a tool that could help you work out harder, run for longer, feel less pain and generally improve your workouts in every single way. But you decide not to use it.

Well, there is. Music. The benefits of music when you’re working out are huge, and if you’re not using it, we recommend you create a pumped up workout mix ASAP.

Plus, lets face it, cardio can be a little dull, and listening to music keeps you focused and your attention where it should be, rather than staring at your phone or up at a TV.

Whether you’re using a commercial treadmill or a nifty folding running machine, there’s no point in spending all the time and effort to work out if you’re going to undo all that good work by wearing the wrong shoes.

There’s a reason the running shoe business is a multi-billion dollar industry. They work.

So go and get yourself fitted for a decent pair of running shoes. It’s an investment that will pay itself back over a thousand times. 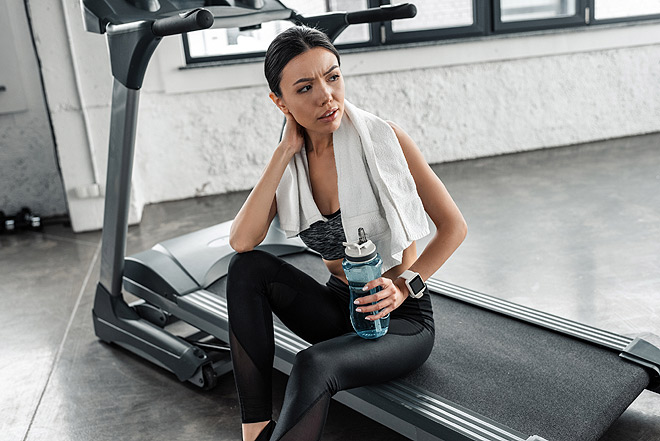 Did you know that you can actually lose more water on a treadmill than you do outside. The main reason for this is the lack of air resistance and wind, which wicks away sweat and keeps you cooler.

So no, it’s not in your head. You do actually get hotter and sweat more in the gym rather than outside.

This is a good thing, because it means you’re working out harder, but it does mean you need to be more mindful of your hydration.

Pretty much every treadmill will have a bottle holder, so keep a bottle of water in easy reach, and try to drink about 5 ounces of water per 20 minutes of running.

If you’re running for longer periods (>60 minutes) then you’re also going to need to replace the electrolytes lost in sweat. This is where sports drinks or dedicated energy bars come in handy.

But do yourself a favour and avoid energy drinks, they’re almost all sugar and caffeine, and will probably make you feel worse.

The same principles apply as warming up. Slow down the pace by walking for a few minutes at the end of the workout, and if you feel any pain, stretch out when you’re done.

Plus, there’s another reason to warm down. If you’ve been working hard, then suddenly stopping can cause a drop in your blood pressure and heart rate, which can make you feel dizzy or ill.

So do yourself a big favour and take a few minutes to warm down properly at the end of every workout. You’ll thank yourself later.