Home
Guides
Are Massage Guns Any Good & Do They Work?
What's in this guide? hide
What is a massage gun?
What does a massage gun do?
Do they really work? – What’s the science behind them
Massage and sports performance
Myth-busting: Can they help with weight loss?
Massage guns: a quick buyer’s guide
Should you get a massage gun?
What’s a good one to buy?
REFERENCES & FURTHER READING

What is a massage gun?

At first glance, massage guns might resemble a power tool like a handheld drill, or another, more intimate form of tool. They look surprisingly simple, and that’s because, well, they are. Most massage guns are only really made up of a motor, a battery, and the reciprocating massage arm, with a few attachments like battery indicators thrown in.

Massage guns are also deceptively simple to use. Just fit the correct massaging head for the job you’re looking for, turn it on, and place it on the part of your body that you’re looking to work on. This lets the gun take the place of a massage therapist or physio, compressing and rubbing your body to work away all those aches and pains. 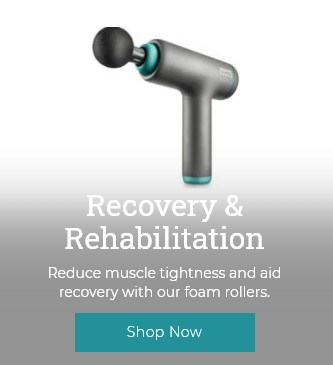 It’s also common to see massage guns that have a replaceable head and come with various settings and swappable attachments that let you target different areas of your body more effectively.

What does a massage gun do?

According to the manufacturers and massage gun advocates, there’s a whole range of benefits that you can gain from using one of these devices, which might include: 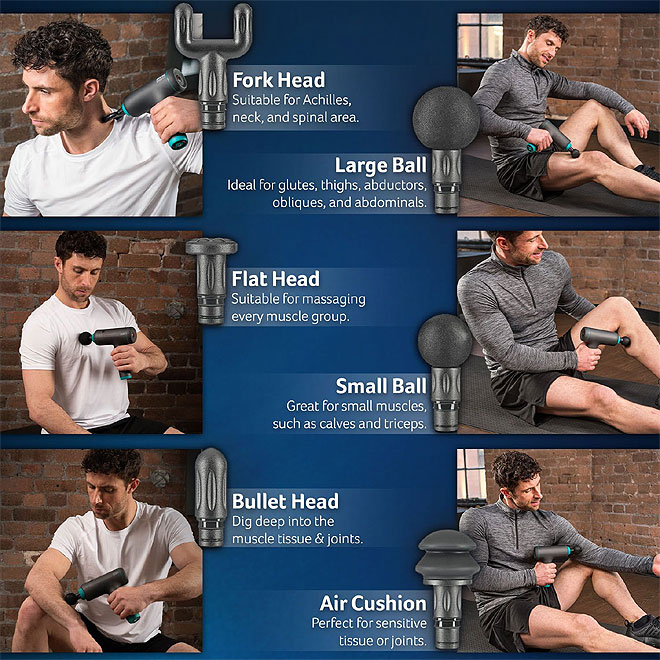 If you’ve been part of the fitness game for any amount of time, you’ve probably already realised that after workout recovery is big business.

The market for tools, lotions and magic potions like foam rollers, CBD oils, and more that can supposedly boost your recovery time, cut down on after session aches and pains, and increase the amount you’re able to workout, is almost as large, if not larger than the market for equipment and supplements themselves.

Like everything fitness, the fads all come and go, but one thing that’s always been a recovery staple is a good sports massage.

That’s because, at this point, the benefits of a sports massage are undeniable:

Massage guns use the force of percussive therapy to manipulate your body’s soft tissue.

Lately, there’s been a rising trend in the use of massage guns, which promise the same range of benefits from the comfort of your own home, delivered at your own pace and time.

But are massage guns as good as the manufacturers promise? Do they offer the same results as a sports massage? And are they worth your time and money? Just what is the science behind it all?

Keep reading to find out exactly what you need to know about massage guns, what this means for you, and whether you should buy one.

Do they really work? – What’s the science behind them

Surprisingly, there’s only a handful of studies on the effectiveness of massage guns and their effects after exercise.

Half of the group were treated with high-frequency vibration therapy (massage guns) on and around their legs, with the other half receiving no treatment as a control group.

The control group self-reported the expected amount of pain and were tested and found to have increase lactic acid, creatine kinase, and physical indicators like posture changes.

The group who received massage gun treatment had less pain on average than the control, and experienced far fewer physical symptoms, with up to 50% less DOMS after 3 days.

A second study examined the effects on the upper body, specifically the arms. The tested group were put through a rigorous workout, then one arm of each participant was given vibrational treatment.

Again, the results were impressive. Self-reported pain was significantly lower after two to three days, with increased ranges of motion and lowered levels of creatine kinase, all of which would affect the ability to exercise again.

Other studies about massage guns

For example, this study examined the effects of repetitive tapping motions in massage on mobility, and found that anything up to five minutes was effective, with an ideal duration of two minutes per affected area.

Further studies also support the idea that massage can massively affect recovery after strenuous exercise (the linked study was to absolute failure) though it also tested foam rolling versus vibrational foam rolling, and found little to no difference.

This suggests that vibration by itself isn’t a magic bullet, and any form of massage on an affected area can have a net positive effect. However, there are still a few major reasons why you should consider a massage gun.

Myth-busting: Can they help with weight loss?

Some massage gun manufacturers have also started pushing the weight loss benefits of their products. We’ll address this now, clearly and cleanly:

Massage guns cannot directly cause you to lose weight

However, there may still be some truth in the claim, through incidental side benefits.

First off, as we’ve already discussed, massage guns will reduce post workout soreness and increase your recovery. This will let you work out more, and work out harder. Both of these are naturally conducive to burning more calories.

Secondly, massage has been linked to increasing the effectiveness of the lymphatic system, which can help your body naturally flush itself clean of toxins, fight inflammation and increase metabolism, all of which can actually be a contributing factor to fighting weight gain.

So while we wouldn’t buy a massage gun with the goal of losing weight, if you are looking to drop a few pounds, using a massage gun isn’t going to hurt you when it comes to reaching that goal.

The last thing you want after a heavy workout is to have to fight with a weighty massage gun and put further strain on your wrists and arms.

In general, look for smaller, lighter models that are ergonomically designed and easy to hold, without cutting down on the total power.

In terms of weight, the highest we would comfortably consider is around the 2lb (~1kg) mark. Anything higher is going to strain your arm after more than a few minutes of use, and should be avoided.

Your motor should have several speed settings. Look for a motor that can reach at least 2400rpm, which is ideal for digging deep into larger, tighter areas.

A lot of modern massage guns feature powerful lithium-ion batteries, similar to the batteries found in premium electric shavers and other devices, that charge quickly and hold a long charge.

If possible, we recommend buying a rechargeable massage gun. This lets you bring it with you when you head to the gym, or away on business trips, etc. It also means that you’re not tied to a power socket when you’re using it, so you’re free to flop on the couch and (try to) relax!

Quieter is better. It’s more relaxing, and won’t interrupt anything you or your friends and family are doing.

A good maximum sound level to look for is around the 40 to 50 dB mark. This is around the level of normal conversation, meaning general operation should be less than this. We would avoid anything higher, as it’s going to start reaching uncomfortable levels fast, especially when you’re doing traps and other upper body areas.

It’s also worth considering everything else you get as part of the package, for example, the different head attachments, whether it comes with a carry and storage case, and the warranty.

Should you get a massage gun? 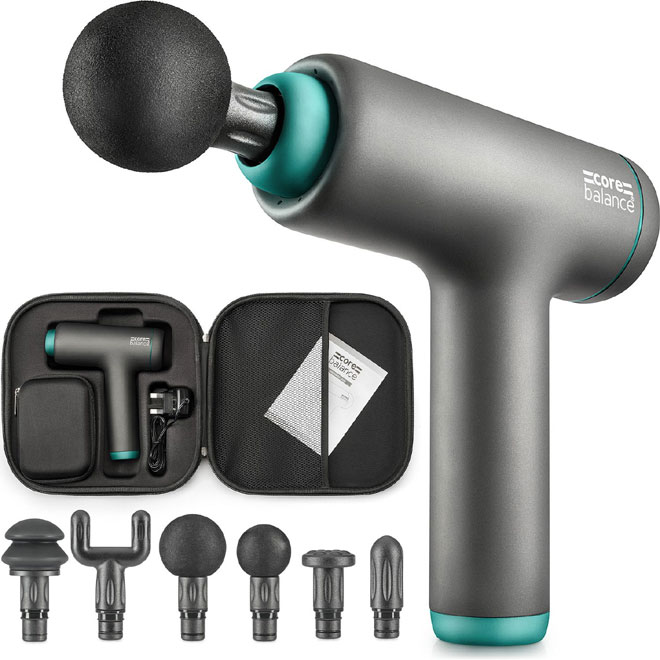 The evidence is clear. Massage has a huge effect on post-exercise recovery, and while a massage gun might not be any more effective than conventional forms of massage, a massage gun is probably the simplest and least strenuous method of delivering targeted relief with almost no effort.

If you’re interested in increased recovery and better workouts or regularly suffer from aches and pains after working out, a massage gun is probably a good investment for you.

What’s a good one to buy?

Taking everything into account, our top choice for massage guns is the massage gun from UK company Core Balance Fitness. Shipped from Devon, right here in the UK, it has everything we look for in a massage gun, including: