As we roll into the colder, wetter months, it’s going to get much harder to just hop on your bike and get outside for a long ride.

But for anyone looking for that real-world feel, there’s an option that lets you use your existing bike indoors, matching the experience of road riding as closely as possible.

But is it worth your time to buy and set up a turbo trainer, and which one should you invest in? Read on through our guide to find out more.

What is a Turbo Trainer & how does it work?

A turbo trainer, sometimes just called a turbo, is a device that clamps around the rear axle of your bike, holding it in place and adding natural resistance, letting you pedal hard and closely resembling the experience you would get from taking your bike out on the road.

There are a lot of options when it comes to turbo trainers, but most turbos will fit most bikes without issue.

Modern turbo trainers are also increasingly used alongside exercise apps like Zwift or Kinomap, which let you follow predetermined routes, challenge yourself against other riders, and link to a tablet or smart TV so you’ve got something cool to look at when you’re riding, eliminating a lot of the boredom that comes from indoor cycling. (More on apps later.)

Why buy a Turbo Trainer over an exercise bike?

There are a few good reasons to buy a turbo trainer over a separate, dedicated exercise bike:

What are the different types of Turbo Trainer?

The oldest (some would say out of date) style of the turbo, a fan-driven trainer uses air resistance to provide the resistance when you’re riding.

This makes them incredibly loud when they’re in use, especially at high speeds, as well as being prone to breaking down, and with a very limited amount of resistance settings.

Most manufacturers are moving away from air resistance, in turbo trainers and exercise machines in general, so expect to only see this on the cheapest models.

A fluid-driven turbo uses an impeller wheel suspended in a thick liquid to provide resistance. This has some serious upsides, but also a major downside.

Upsides include the fact that it’s incredibly quiet, and there’s a natural scaling of resistance, as the harder, you pedal, the harder the impeller blades have to work to push through the fluid (like an oar when you’re rowing.) But the downside is, there is no way to change resistance beyond that.

Fluid driven turbos are a good middle ground option, balanced in terms of price and quality. 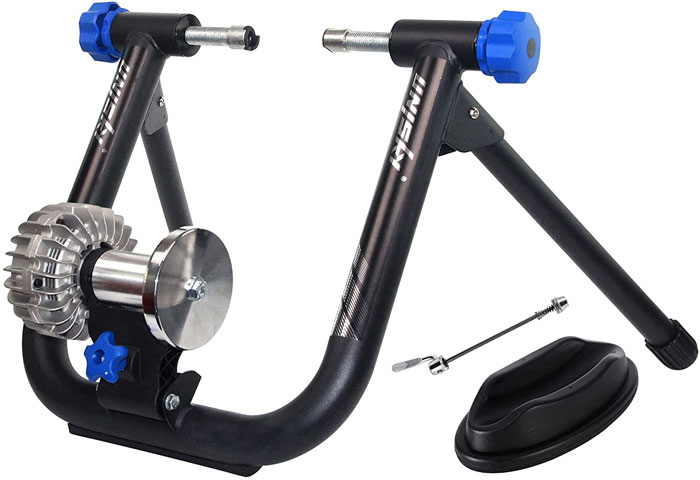 Magnetic resistance generally offers the most customisation among turbos, with resistance being generated by magnets as opposed to other magnets or a metal plate.

This gives you a lot of adjustabilities and keeps the system quiet in use as there are no parts in contact, but it might not offer the highest levels of resistance and tends to run pricey. 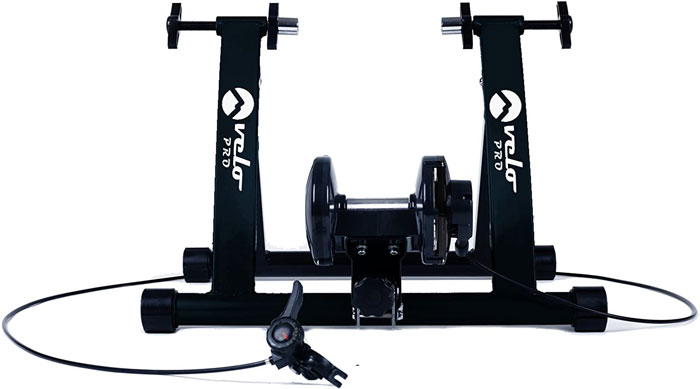 A direct drive unit replaces the entire rear wheel of your bike, mounting the rear axle directly into the system itself.

These offer by far the most realistic feel, but tend to be the most expensive, and are also normally quite large and bulky.

However, the benefits are massive. One, your rear wheel isn’t in use, so it saves on tyre and bike wear. Two, direct-drive trainers are normally the quietest kind of turbo. Finally, three, because it’s linked directly to your bike, the trainer can directly measure resistance and work, and they are normally equipped with Bluetooth and ANT+ so can be linked directly to a workout app, for the most accurate results possible. 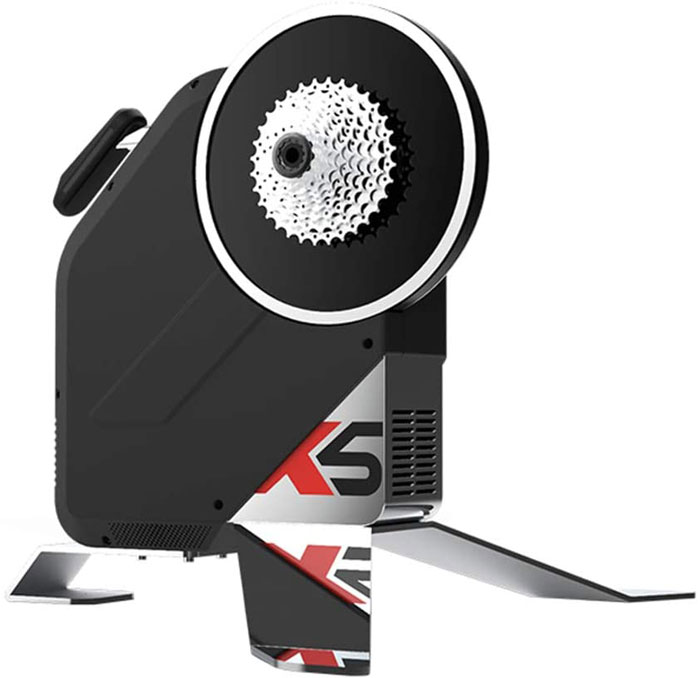 How do you set up a Turbo Trainer?

Setting up your turbo trainer correctly is incredibly important, as a bad set-up can prevent you from exercising properly, or even cause damage to your bike.

Start by deciding where you’re going to be using your turbo. Having a permanent space set up is ideal, but might not be feasible in a lot of homes.

Make sure that your trainer is placed on a stable, flat surface. If possible, avoid carpeted surfaces, and lean towards harder, flat floorings like hardwood or even a concreted garage floor.

Make sure that there is nothing underneath your turbo. That it does not rock or wobble when you put weight on it or get on your bike.

If you’re working out for any length of time, expect to get hot and sweaty, so ventilation, airflow and through the air are important factors.

Unless using a direct drive turbo, your bike’s wheel should look and feel as it does when you’re riding on a road. This means the bike should sit at a comfortable 90-degree angle, with no lean.

Your bike’s tyre should be flat against the turbo resistance pad, with enough pressure on the wheel that it can find grip, but without pushing hard enough to flatten the tyre excessively.

Finally, when you get on to your bike for the first time, check that everything is in place, and test that you’re stable by leaning or wobbling slightly before you start riding.

Can I use a Turbo Trainer on my bike?

As we’ve already mentioned, as long as you have a reasonably decent bike from a reputable brand, the answer should be yes.

A turbo trainer should fit almost all road bikes, as well as the vast majority of mountain bikes. As always, it’s worth checking before you buy.

What is the best way to train on a Turbo Trainer?

If you’re training bare and freeform, then you should consider working out on a turbo trainer as similar to following a program on an exercise bike.

It’s best to start with a slow warm-up, to let your muscles and joints adjust and prepare. From here, the absolute best way to train is using intervals, mixing up periods of high intensity or high resistance with periods of lower, slower intensity.

But in our opinion, the single best way to train is to use a fitness computer or app with pre-prepared programs for you to follow along with, which takes out all of the guesswork and allows you to directly see your progress and improvement.

What are the best fitness apps to use with a Turbo Trainer?

Before we address fitness apps, we need to discuss how you can make your turbo trainer work alongside one.

If you buy a direct drive turbo, then it should already have the capacity for Bluetooth built into it. If not, then you can buy a separate cadence sensor to mount onto your bike. (Our complete guide to cadence sensors can be found here.)

Regardless of what method you use to link your bike to your app, there’s a whole lot of benefits to doing so.

One, there are serious psychological benefits of having targets to meet, as well as having a whole bunch of fun and interesting workouts to follow, which makes you more likely to stick to workouts.

Two, apps will let you check your metrics, and the old fitness adage still holds true. What gets measured gets managed.

Finally, training alone is boring, which is why apps like Zwift offer interactive and group training sessions.

If you want to learn more about interactive fitness apps, we recommend reading our guide, found here.

Is a turbo trainer as good as real road riding? No. It’s always going to be different, but it’s the closest you’re ever going to be able to get from inside the comfort of your own home.

Many professional and amateur cyclists already rely on turbo trainers to keep them moving when bad weather hits, or in the darker months of the year. This is why if you’re at all serious about your cycling, then a turbo trainer might just be the right choice for you, too.